PrevPreviousWhat Makes MotoBatt Battery Different and Why Are The Yellow Batteries Becoming So Popular?
NextApril Is Not A Fool!Next 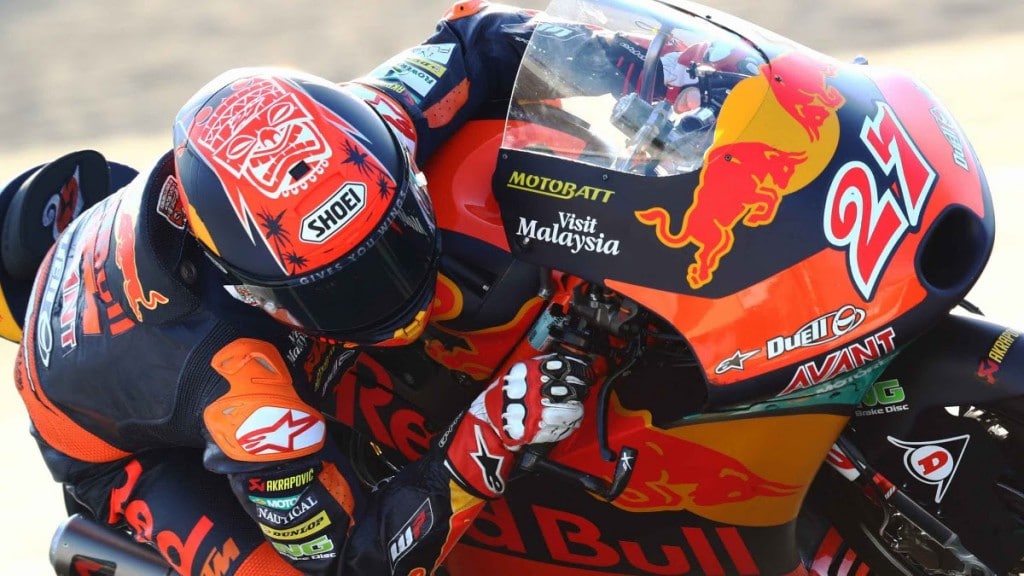 This year their riders comprise of Tetsuta Nagashima and Jorge Martín in Moto2, and Raúl Fernández and Kaito Toba in Moto3. They also have Niki Tuuli riding in the all-electric MotoE championship. And for the 2021 championship, Moto2 hotshot Remy Gardner, son on Australian legend Wayne Gardner has signed to ride for the team.

Already renowned for his all-out riding style and dedication, Gardner now joins Aki Ajo’s knowledgeable and proven set-up, and under the watchful gaze of the KTM GP Academy that has promoted two riders to the MotoGP structure in the last two seasons. Aki Ajo has overseen two Moto2 world championship title and two runner-up distinctions in the last six years; helping in the development of current Red Bull KTM racers Miguel Oliveira and Brad Binder.

Remy Gardner: “I am very happy to be signing this contract for the team of my dreams. I am proud to be part of the Red Bull and KTM family, and of Aki’s structure. I want to thank all of them for giving me this opportunity for 2021. I also thank all those who have helped me to get here. I can’t wait to start working with them next year and I hope that together we can do some amazing things.”

Aki Ajo, Team Principal: “I’m very happy to have Remy in our project next year. He is a young talent, but at the same time he has extensive experience in the FIM World Championship. This combination of abilities is perfect for our project of developing riders. We are looking forward to working together next season. I know that Remy has something special compared to the rest of the competitors: he has great talent, a good feel for the bike and is a born fighter. I hope that, as a team, we can give him a boost during the season for the style that comes naturally to him. I am personally very excited to have Remy with us, and about what 2021 has in store.”

Jorge Martin is the team’s lead rider in Moto2, who is currently sitting in 5th place in the Moto2 championship despite missing the recent round due to illness. Martin took the Moto3 World Championship in 2018, moving to the Red Bull KTM Ajo team in 2019 where he took two podiums in Japan and Australia.

Tetsuta Nagashima is a Japanese rider who took the championship of the GP-Mono class in the All Japan Road Race Championship. Nagashima has been a permanent fixture in the Moto2 World Championship since 2017. He was 26th in 2017, 20th in 2018 and 14th in 2019, the season in which he took his first pole position at the Austrian Grand Prix and finished several races in the top 5. In 2020, the Japanese rider joins the Red Bull KTM Ajo

project, bringing his lengthy experience in the Moto2 class to a team that he already knows from his time in the FIM CEV.

Raúl Fernández is a Spanish rider who participated in the Red Bull MotoGP Rookies Cup and the FIM Moto3 Junior World Championship. 2019 was his first full year in the Moto3 World Championship, and he took spots in the Top 10 at several races. For the 2020 season, Raul Fernandez joins Red Bull KTM Ajo, a team with whom he hopes to continue to grow as a rider and fight for the top positions. Raul finished 6th in race 2 of the recent Misano MotoGP round and sits in 9h position in the 2020 championship standings.

Kaito Toba debuted in the Moto3 category at just 16 years old in 2017. Toba’s performances have been improving with every season and, finally, he claimed a first Grand Prix victory at the 2019 Qatar GP. This made him the first Japanese rider to win in the lower cylinder class since 2007. In 2020, he continues with Red Bull KTM Ajo in the Moto3 World Championship and currently sits in 19th position after claiming a top 9 result in the Misano round.

PrevPreviousWhat Makes MotoBatt Battery Different and Why Are The Yellow Batteries Becoming So Popular?
NextApril Is Not A Fool!Next

Apart from our special discount, customers will also get a special mystery free gift with every purchase of any Motobatt Hybrid battery.


Unable to retrieve new videos without an API key.