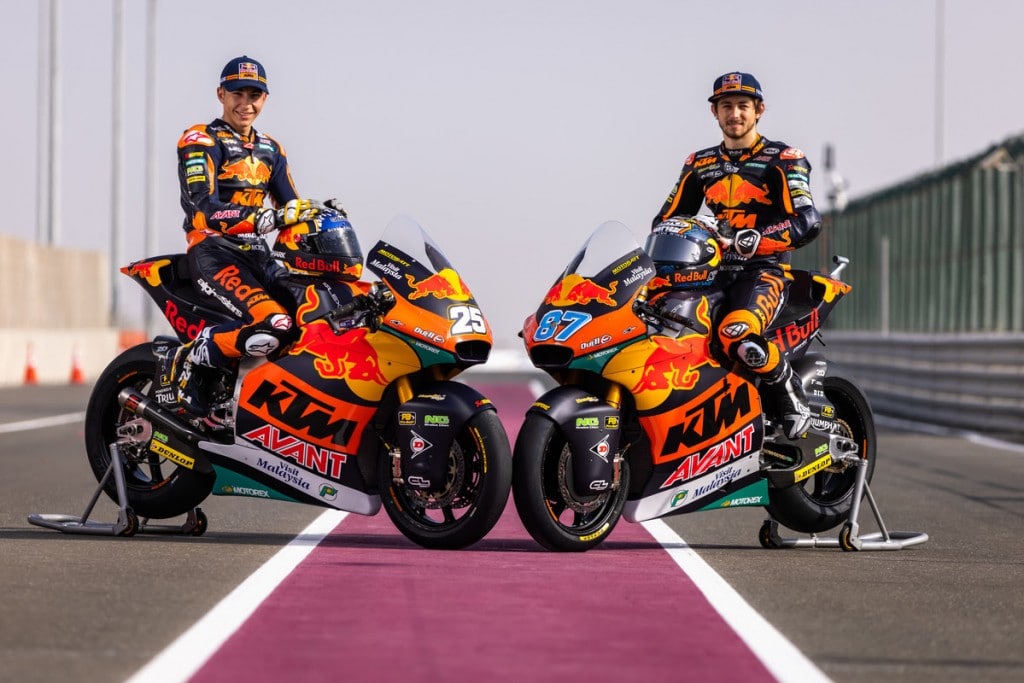 The Losail International Circuit hosted the first round of the 2021 MotoGP World Championship on Sunday, with the new Ajo Red Bull KTM line-up achieving a dream start to the championship.

The wait was finally over for the MotoBatt supported Ajo Motorsport team as they returned to the Losail circuit with their new-look team. For Moto2, the riders are Remy Gardner and Raul Fernandez who, after an intense period of pre-season training, both felt ready for the new challenge.

Gardner showed during preseason that he was going to be one of the riders to beat in 2021. The Australian topped the timesheets at a private test held in Portimao and concluded three days of work in Qatar with the third best time, 4 thousandths off the fastest rider.

Fernandez begins his rookie campaign in the intermediate class, although it will be his second season with Red Bull KTM Ajo. The Spaniard takes the step up to Moto2 after showing great maturity and development last season, something that he carried over to the 2021 winter. Fernandez set the eighth best time in the Qatar test and is adapting to the category immediately. His goal this year will be to keep on learning and progressing, race after race.

On race day, Gardner made a good start from the second row of the grid and was quick to carry over his strong pace from practice into the race. He caught up with the front-runners and steadily moved his way up through the order. The Red Bull KTM Ajo’s steady ascent took him into second place by Lap 8, and with the contest leader opening up a gap, the Australian focused on establishing an advantage of his own over the chasing pack. After securing second position, Gardner now has six Moto2 podiums to his name.

In his debut race in the class, Fernandez put on a spectacular performance, which started with the Spaniard on the front row of the grid. He dropped down into fourth on the opening corner, but kept up with the leading riders and made his way into second place just a few laps in. Over the course of the contest, he would lose touch with the leader and was caught by his teammate, who overtook him. After several laps riding alone, Fernandez conceded two more positions and crossed the line in fifth.

Thanks to the results of the Qatar Grand Prix, Remy Gardner is second in the overall standings with 20 points. Raul Fernandez is fifth with 11. The Red Bull KTM Ajo duo will be back at the Losail International Circuit for the second round of the Moto2 World Championship, the Doha GP, from April 2nd to 4th.

Aki Ajo – Team Manager: “The Moto2 season started well for us. We have a good combination of experience and young talent on the team. Although Remy [Gardner] has great experience in Moto2, whilst Raul [Fernandez] is a rookie, we saw today that both are ready to get into the fight. I think that Remy will be one of the riders challenging for the top positions in the World Championship at the end of the year, whilst Raul will keep improving and adapting. He has already taken some giant steps in the last few weeks.”

In Moto3 the Ajo Team is once again looking like the team to beat, with Jaume Masia showing why he is currently considered to be one of the strongest riders in the class with consistently competitive times in qualifying and finishing just 4 thousandths of a second off the top spot. Teammate, rookie Pedro Acosta made great strides through testing and qualifying, leading the way in FP1, and finishing qualifying in 11th spot.

But it was race day where the duo would really show their dominance, starting the season in an unbeatable way. Masia, who started from the second row of the grid, dropped down positions on the first corner, but swiftly recovered and imposed a strong pace. The Spaniard latched onto the leading group and moved to the front of the field, engaging in an intense series of overtaking moves with his rivals. The Red Bull KTM Ajo Moto3 talent needed to push on the final laps to withstand the challenge of his teammate and the rest of the riders in the chasing pack. Masia eventually took the chequered flag in first place.

In his debut race as a World Championship rider, Pedro Acosta made an excellent start, going from eleventh on the grid to fifth on the first lap. The Red Bull KTM Ajo rookie settled into the first group, keeping up the pace and even taking the lead on several occasions. Throughout the contest, the 16-year-old pitted his talents against some of the most experienced competitors in the class, catching them out with great overtaking moves. After some very tight final laps, in which he fought for the victory, Acosta came home second, completing a stellar first outing in Moto3.

Masia thus heads the overall standings with 25 points, with Acosta in second with 20. The Red Bull KTM Ajo team will remain in Qatar this week, as the Losail International Circuit hosts the second round of the year – the Doha Grand Prix – from April 2nd-4th.

Aki Ajo – Team Manager: “It was a great day for us in Moto3. We are very happy with the work that the entire team did, especially our two young talents. I’m satisfied with how they worked during the winter, as the aim was always to get us ready for racing, rather than just setting fast laps. Both Jaume [Masia] and Pedro [Acosta] adapted perfectly to the Red Bull KTM Ajo philosophy. I hope that we can keep performing at this level for the whole season. I believe that we will see some great races in the future, as we are highly motivated.”

For an avid biker, we know you love your bike and will do anything to give more love and attention

“Go beyond limits” This technology is unique throughout the world, basically, it is the perfect mix between the advantages of

The Losail International Circuit hosted the first round of the 2021 MotoGP World Championship on Sunday, with the new Ajo

April Is Not A Fool!

Sign up to our newsletter to receive special offers