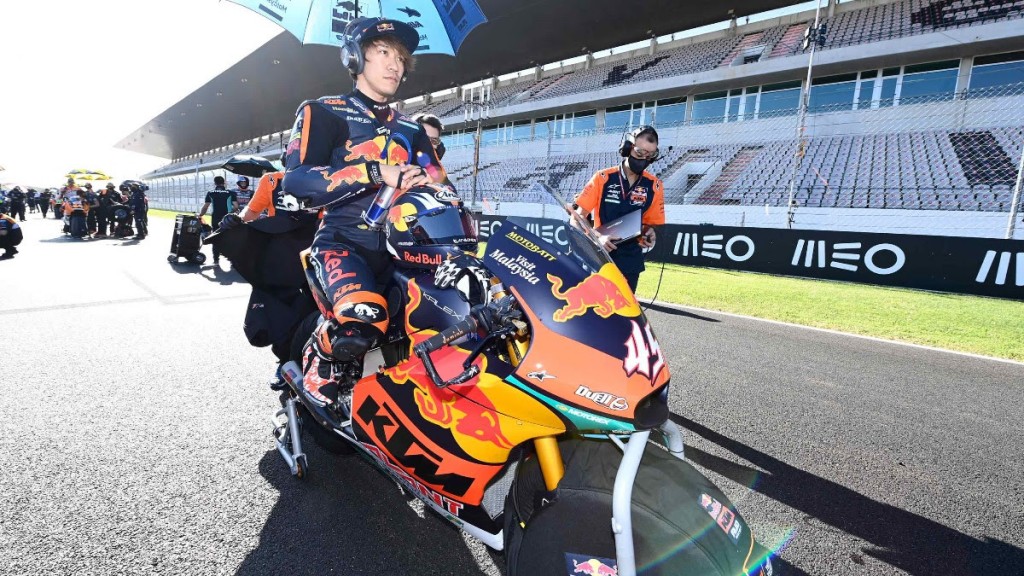 With an unprecedented year causing disruption to the MotoGP season, the MotoBatt sponsored Red Bull KTM Ajo Team sign off with a stunning win in Moto 3 and a top 6 placing in the Moto 2 championship

The Red Bull KTM Ajo team headed to the last round of the 2020 Moto2 and Moto3 World Championship in Portimão in good spirits. Moto 2 rider Jorge Martin came into the season finale highly motivated after taking the win at the Valencia Grand Prix, where his last-lap overtake earned him a second victory of the year.

Before the race, Martin commented, “I’m really looking forward to the Portuguese Grand Prix. It will be my last race with the team and I want to bring them a good result to thank them for these two years together. We have done an incredible job this season and we have always given one hundred percent, and this is what I will take away from this campaign. I have never ridden at Portimão, so it will be a beautiful event. We have to be skilful to adapt quickly and well to the track.”

Martin was sitting in fifth position in the Moto2 World Championship heading into the final round with a tally of 150 points.

Martin’s teammate, Tetsuta Nagashima also had a strong showing at Valencia, climbing 11 positions to finish 12th overall. And with a strong knowledge of the Portuguese circuit, he was looking for a good showing at the finale.

In Moto3, the MotoBatt sponsored team aimed to round off the 2020 season with good results, having been on the podium at the last four rounds.

The Red Bull KTM Ajo Moto3 riders, Raul Fernandez and Kaito Toba, came into the last round of the year with extra motivation, as they know the track from their time in the FIM Moto3 Junior World Championship.

At the previous Grand Prix, Fernandez claimed a hard-fought third place, having set the pace during the contest. He was on the rostrum three times at the last four events, and he has fond memories of Portimão, where in 2016 he got his first podium in the FIM Moto3 Junior World Championship by finishing third at Portimão. Fernandez headed to the finale in sixth position in the overall standings, with 134 points.

Toba arrived at the final round wanting to make amends for the previous weekend, where he crashed out in second place. Toba had raced at the Algarve International Circuit in 2015 and 2016 in the FIM Moto3 Junior World Championship, finishing in the points on both occasions.

MotoBatt continues their successful partnership with the Red Bull KTM Ajo team for a successive season, looking for better results in what will hopefully be a full season of racing.

With Aussie racer Remy Gardner, winner of the Portimao Moto2 race, joining the Red Bull KTM Ajo team for the 2021 MotoGP season, CEO of MotoBatt, Manfred Chong is excited to be sponsoring the Ajo team once again, which he sees as a perfect fit for the MotoBatt brand.

Manfred explains, “I chose the Ajo team as because they are a reputable and well-organised racing team in Moto2 and Moto3 whose philosophy of hard work and innovation matches the ethos at MotoBatt. They also have an exceptional track record, and when I was researching which team to support for the 2020 and 2021 seasons, I was excited to partner with Mr Aki Ajo as I trust and respect what he has achieved in this top level of motorsport.”

Already renowned for his all-out riding style and dedication, Gardner now joins Aki Ajo’s knowledgeable and proven set-up, and under the watchful gaze of the KTM GP Academy that has promoted two riders to the MotoGP structure in the last two seasons. Aki Ajo has overseen two Moto2 world championship title and two runner-up distinctions in the last six years; helping in the development of current Red Bull KTM racers Miguel Oliveira and Brad Binder.

Sign up to our newsletter to receive special offers